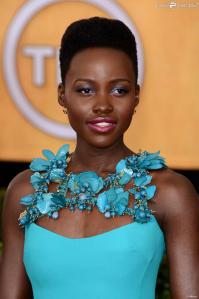 12 Years a Slave (2013) is a tough film to watch for a number of reasons but Lupita’s performance as Patsy is truly incredible and heart-breaking. I don’t think I’ve wanted someone to get the Oscar as much as I wanted her to get it that night.

I was in part expecting all the film roles to open up for Lupita after she won the Oscar (and just about every other award going) but that hasn’t really been the case. She’s in the new Star Wars film which is cool and I really want her to be a badass Queen or Jedi. I’ve got the book The Queen of Katwe by Tim Crothers though I haven’t read it yet, I definitely will be soon since Lupita will be starring in the film adaptation.

I also love Lupita Nyong’o’s sense of style, I mean I’ve never seen her look bad on the red carpet and her dresses are always gorgeous. She’s just so wonderful and I can’t wait to see what she does next.