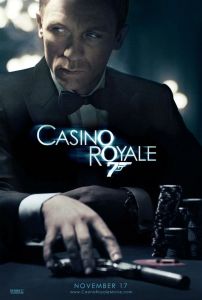 James Bond (Daniel Craig) on his first mission as 007 must defeat weapons dealer Le Chiffre (Mads Mikkelsen) in a high stakes game of poker, but things aren’t what they seem.

Casino Royale is an action-packed reboot of the James Bond franchise that’s got more emotion than its predecessors. This time around Bond has only recently become a 00 and his mission to take down Chiffre is his first so he is rather impulsive and brash. Also, since Casino Royale in some senses discards the previous films, you see a softer side to Bond as he forms a relationship with Vesper Lynd (Eva Green) and how he becomes colder and more of a womaniser.

While the focus of the film and a lot of the tension comes from the poker game, Casino Royale also has some great action sequences. The opening chase sequence in Madagascar is a great example of how different Casino Royale is to the previous Bond films – it is rough and realistic and more like the Bourne films than previous high-tech Bond films.

The characters and actors all work really well together, even the secondary characters on the most part are fleshed out and interesting. Rene Mathis (Giancarlo Giannini) is Bond’s contact in Montenegro and he’s the kind of guy who has seen it all before and has a witty humour and his conversations with both Bond and Lynd are great. Felix Leiter (Jeffrey Wright) makes his first appearance in the Bond series since Licence to Kill (1989). Leiter is more softly spoken and definitely comes across smarter and more controlled than Bond – I really want to see more Bond films with Jeffery Wright in them as Felix Leiter.

I didn’t find Le Chiffre that memorable of a villain, he could certainly be threatening and foreboding but there were other characters that seemed more of a threat to Bond. The fact that the main focus of Bond and Le Chiffre’s rivalry and confrontation is at a poker table is a bit of a double edged-sword. It brings a lot of tension to a small space but at the same time it can be a lull in the action that can be a bit dull.

The finale in Venice is definitely something to behold as it turns characters and events on their head giving you an action-packed showdown but more questions than answers.

Casino Royale is very bold for stepping away from the previous Bond film full of gadgets and ridiculous stunts, it’s a bold move that works though and, while it doesn’t have that great of a villain in my mind, it does has one of my favourite Bond theme songs ever so it gets brownie points for that. 3/5.