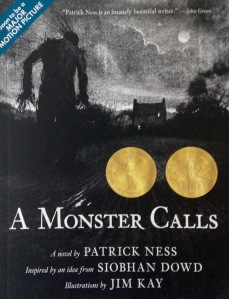 I thought I was too old for A Monster Calls, I thought because it had pictures it would be baby-ish – how wrong was I?!

A Monster Calls is a beautiful book. It’s about grief and emotions and allowing yourself to ask for help when you need it and how you can cope when things are tough. It might be about a monster who arrives at Connor’s door wiling to tell three stories in exchange for a story from Connor, but it’s also has clever morals and life lessons that can resonate with anyone of any age.

The illustrations are dark and creepy yet beautiful. They add so much to the story and in a weird way show Connor’s anger and other emotions in a different way.

There’s some beautiful lines spoken by the monster that will definitely stay with me. Quotes about human nature and how people aren’t all good or all bad, quotes about grief and choices and decisions. The final part of A Monster Calls made me tear up a bit, because we’ve all lost someone, or we will do in time, and how the Monster talks about people and their minds are so true – “The answer is that it does not matter what you think, because your mind will contradict itself a hundred times each day.”

One of my biggest pet peeves – in life as well as fiction – are adults who don’t talk to children about important things properly. Connor is thirteen and his mums seriously ill but she keeps trying to hide that from him which will help no one in the end. It’s frustrating and clearly Connor knows something is wrong but no one will really explain anything to him and when his grandmother tries his parents don’t always let her.

Never have I been so wrong about a book and been happy about it. A Monster Calls is a quick read that packs an emotional punch. 5/5.