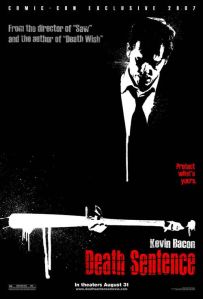 Nick Hume (Kevin Bacon) is a normal guy with a perfect life, until one gruesome night he witnesses the death of his oldest son Brendan (Stuart Lafferty) and it changes him forever. As Nick loses faith in the judicial system, he takes matters into his own hands in order to protect his family.

The violence in Death Sentence can be a bit excessive and gory but it almost balances out well with the more emotional moments. Kevin Bacon is pretty great as Nick Hume, he does both the scared business man and the unrepentant vigilante very well. The finale sees him taking on the bad guys lead by Billy Darley (a rather intimidating Garret Hedlund) and he is almost unrecognisable both in appearance and attitude.

Death Sentence is directed by James Wan who is famous for horror films and now for directing Fast & Furious 7. I mention this because in Death Sentence there’s a scene not too dissimilar to when Paul Walker runs across the top of a bus that’s falling off a cliff and just manages to jump to safety. In Death Sentence it’s on a smaller scale and features a multi-storey carpark and Kevin Bacon. It’s a great scene and I couldn’t help but wonder if the scene in Fast & Furious 7 eight years later was thought up by Wan.

Death Sentence is a pretty paint-by-numbers revenge thriller but the action scenes are good and the soundtrack really stands out. The film’s pretty predictable and the bad guys sometimes stray into being pantomime villains, the usual violent men in gangs you always see in this sort of film.

Death Sentence is pretty violent and gory but Kevin Bacon does a good job with an average revenge thriller. 3/5.