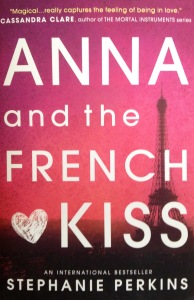 While miscommunication is what often drives romance novels, there can be too much of a good thing. It often made the characters seem stupid because they weren’t picking up on social cues but at the same time it’s kind of believable because these are teenagers in love who are scared to put their feelings out there. That doesn’t make it any less frustrating though.

Anna is sweet and a film addict (though she doesn’t seem to realise that France was the birthplace of cinema) and I did like how she was a fish out of water when she first arrived in Paris and also when she went back home to Atlanta for Christmas, both times it was a culture shock and it was interesting to see her reaction to both these events.

Étienne is sickeningly perfect, or at least he is to Anna. Sometimes I got pulled along with it too because he really is a nice guy but then he does also stay in a relationship perhaps longer than he should have and strings two of his friends along. My thoughts on Étienne are confusing – again, probably because he didn’t talk about how he felt.

I really liked Rashmi and Josh, two of Anna’s friends who were dating. They had their heads screwed on and were the sanest in the whole friendship group, also they did seem to communicate and while that did lead to some arguments it was better than bottling everything up.

I also liked the description of Paris, it made the city sound beautiful (I’ve been to Paris twice and both times it was pouring with rain and miserable) and the way Anna and her friends explored the city was great as you got to see a side to it that wasn’t just for tourists since these people were actually living there.

Anna and the French Kiss is a quick read with believable albeit sometimes annoying characters. It’s easy to see why it’s a favourite among contemporary YA readers but sometimes the adorableness and angst was too much for me. 3/5.