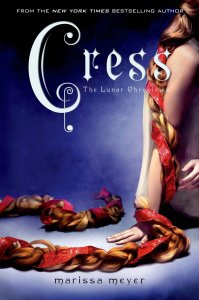 Cress has been locked in her satellite for most of her life, it’s her own little world where she spies on Earth for Queen Levana. Soon Cress’s world gets a lot bigger when she makes contact with Cinder and her motley crew. Cress ends up on Earth in the desert with Thorne. Meanwhile Cinder, Iko and Wolf need help and Scarlet is all on her own. Cress needs to be brave as she’s suddenly in a world of adventure she’s only ever dreamed of.

As this is the third book in the series there may be some vague spoilers for the previous books Cinder and Scarlet but they will be kept to a minimum.

While Cress may be the titular character, that doesn’t mean all the characters you already know don’t have a lot happening with them. Cress is definitely an ensemble book and the finale features them all working together in a heist! I love heists a ridiculous amount and seeing how all these different characters who each have their own problems and differences work together to try and save the day was a joy.

It took a while for me to warm to Cress as she is so incredibly sheltered that she instantly thinks she’s in love with Thorne and she’s also very naive and scared. After a while it became refreshing having a character that wasn’t instantly calm in a crisis and ready to go against those in charge. Cress is smart as she gains confidence by using her daydreams to make her feel stronger and she’s also a brilliant hacker and an asset to Cinder’s motley crew of misfits.

The action is pretty much non-stop, everything that happens pulls the story along but it still allows for there to be character moments too. Cress is also full of surprises, halfway through the book I thought I knew what was going to happen next but then something sudden and surprising happens and it goes a different way. It’s great that the third book in a series can still be surprising. The way in which all these characters interact really is one of the highlights of the book and the a series as a whole.

Cress is an interesting new addition to our team of heroes and the action and twists and turns never stop. Cress ends on a cliff-hanger so I’m glad I only have a few weeks to wait till I see what happens next in Winter. 4/5.