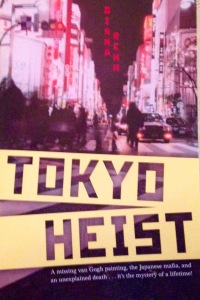 When Violet goes to stay with her artist father over the summer, she never expects to be embroiled in a hunt for a missing priceless sketch by Vincent Van Gough. The sketches are stolen from her father’s client and are held ransom for a painting that hasn’t been seen in decades and until they find it, all their lives are in danger. With her friend Reika, Violet search for the missing van Gough takes her from Seattle to the streets of Tokyo to the beautiful Kyoto. As the mystery deepens and the danger heightens, Violet isn’t sure who to trust – all she knows is she has to find the painting and the criminals before it’s too late.

I loved the whodunit aspect of Tokyo Heist. While “heist” may be in the title, the story really follows the aftermath of the original heist as Violet tries to figure out what happened. There’s a lot of people who seem as if they are hiding something and then there’s the involvement of the Japanese mafia and who could possible know or want to work with them.

Violet is an interesting character. She loves art and Japanese culture but her love of manga and use of Japanese words in her everyday lexicon makes it seem like she’s fetishizing the Japanese culture. It’s a bit awkward, especially at the beginning as Violet feels like she knows everything about Japan but when she arrives in Tokyo it’s a shock to her. It was quite nice to show that while Violet definitely had an interest in Japan and manga, she didn’t really know as much as she thought she did.

Also Violet is just sixteen and it’s slightly unbelievable that the FBI would allow her to know about a sting operation and generally know pretty much the entirety of the investigation. Violet always managed to be able to sit in on important phone calls or meetings to know what the authorities were trying to do to catch the thieves. Also the FBI would take her random theories about who might have had motive at face value and believe her straight away, while it obviously helps the story that Violet is involved with what’s happening, it’s sometimes a bit too convenient.

A slide-plot to Tokyo Heist is Violet and her relationship with her dad which really isn’t great. Her dad reminds me of those people who shouldn’t have really had kids, he’s not abusive but he is just so focussed on his artwork that he often snaps at Violet or ignores her completely. I really didn’t like him and his obliviousness to his daughter’s feelings so every time he appeared he got on my nerves.

One of the highlights of Tokyo Heist is the story’s locations. Seattle is a busy city but because it’s Violet’s hometown it doesn’t feel so alien compared to how she feels when she’s in Tokyo. The descriptions of Tokyo are very vivid and the peaceful Kyoto sounds beautiful.

Tokyo Heist is a mystery with a love of art. It is sometimes a bit unbelievable but if you can get over that you should enjoy it. 3/5.