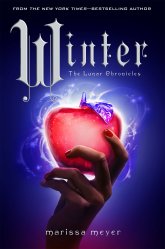 Princess Winter, the stepdaughter of Queen Levana, is admired by the people of Lunar for her beauty and her grace but little do they know about the visions in her head. Winter finds comfort and sanity in her childhood friend Jacin as she struggles to stand up to her stepmother and her rules. There’s some hope for Winter as Cinder and her crew plan to invade Lunar and start a revolution. Winter must find her courage and the threads of her sanity to try and work with Cinder to help save her people.

As this is the third book in the series there may be some vague spoilers for the previous books Cinder, Scarlet and Cress but they will be kept to a minimum.

Winter is a fascinating character. On the surface she seems quite mad and perhaps a bit useless when it comes to overthrowing a Queen but really she is incredibly strong and smart. She has horrible visions that often have her frozen in fear but because so many people think she’s crazy, they underestimate her and how she’s more perceptive than people might think. Also I love how kind Winter is to the people of Lunar, she puts them before herself a lot of the time and never feels better than them because she’s royalty.

The Lunar Chronicles have always had retellings of classic fairy-tales and Winter’s main theme was a retelling of Snow White. It was my favourite book in the series with how it took the fairy-tale elements and adapted them to the story. Some were subtle and surprising and added an extra level of enjoyment to reading Winter.

Once again, while Winter is the titular character, Winter is told from multiple perspectives and I was surprised to be very rarely bored of a characters perspective. Only a couple of times did I wish we’d get to go back to a character that I was really enjoying but then the characters we were with suddenly did something amazing and I didn’t mind anymore.

A lot happens in Winter. The action is pretty much non-stop and it’s interesting to see how different characters meet and interact, a lot of them new and others ones we’ve seen work together for the past three books. A lot of the time events happen that forces the heroes to split up or one person gets left behind – this is a great way to show different relationships and to allow characters their moments to shine.

In Winter there’s political intrigue, espionage, double-crossing, weddings and revolution. While it’s still a sci-fi epic there’s so much else going on that you really don’t know what’s going to happen next. Winter fully deserved its 800 pages as so much happened but it still managed to give a deeply satisfying ending. 5/5.