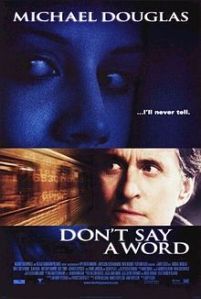 Psychiatrist Nathan Conrad (Michael Douglas) is horrified to discover when his young daughter Jessie (Skye McCole Bartusiak) is kidnapped the abductors demands is that he break through a post-traumatic stress disorder suffering young woman, Elisabeth Burrows (Brittany Murphy), who knows a secret the abductor will do anything to get.

Don’t Say a Word is a tense psychological thriller that may be a bit simple at times but it makes it no less enjoyable. It is a slick looking film, with a great score and any chase sequence is well shot and easy to follow. While Don’t Say a Word can be a bit paint-by-numbers when it comes to a psychological thriller, it really does have a great cast who gives it their all – bar the bad guys, they really are cut-and-paste villains.

Jessie is a smart kid and her mother Aggie (Famke Janssen) is resourceful. Detective Sandra Cassidy (Jennifer Esposito) the police officer who stumbles into the kidnapping through a seemingly separate case, is smart and capable and doesn’t let the men in the force fob her off with excuses. I liked her even though she really wasn’t sure who to believe to begin with. The team of abductors is led by Patrick Koster (Sean Bean) who really is your typical bad guy that could walk from the pages of any thriller. He’s not particularly interesting, or that threatening, he just wants what Elisabeth can tell him. It’s the female characters in Don’t Say a Word who are more interesting and proactive in the plot.

Really the highlight of the film is Nathan Conrad and his relationship with Elisabeth Burrows. Elisabeth is suffering from PTSD but she is very smart and manages to fool a lot of other psychiatrists to think that she’s got many more problems than that. Elisabeth is a fascinating character and Brittany Murphy’s performance is brilliant. The way she can switch from one emotion to another so quickly is great but at the same time you can see how she is slowly starting to and wanting to trust Nathan and as much as trusting him will help her, she’s also scared to do exactly that. Nathan is great as obviously he will do anything to get his daughter back but at the same time you can tell he is a good psychiatrist who does care about his patient. How he gets through to Elisabeth is sometimes tough to watch but their chemistry really is great and elevates the film.

Don’t Say a Word is a thriller that may be a bit predictable sometimes but it really thrives on the relationship and chemistry between the two leads. 3/5.