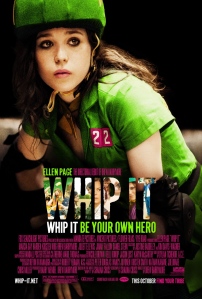 Seventeen year old Bliss (Ellen Page) lives in a small town in Texas and isn’t sure what she wants to do with her life. When she discovers a roller derby league she makes new friends and discovers something she could really love, even if her mother (Marcia Gay Harden) who loves entering her in pageants wouldn’t approve.

While Whip It might have many of the sports movie clichés, the underdog team, the misfits and the family not agreeing with the leads choice in sports, but Whip It has so much charm and great performances that it is so much better than the typical clichés.

The roller derby scenes are fun and exciting but the violence is never over the top. The atmosphere in those scenes are often electric and the commentator ‘Hot Tub’ Johnny Rocket (Jimmy Fallon) is equal parts funny and cringe-worthy.

The difficulties Bliss faces as she tries to juggle her new passion for roller derby, her family and her first love in musician Oliver (Landon Pigg) are very believable. She is a wonderful lead character and it’s though her eyes you see the warmth all these characters have for her and each other.

One of the most delightful things about Whip It is all the different relationships between the different women portrayed throughout the film. Bliss had a strained yet believable relationship with her mother, she and her best friend Pash (Alia Shawkat) argue, and then there’s this incredible friendship and camaraderie between all the members of Hurl Scouts. Maggie Mayhem (Kristen Wiig) is kind of like the mother of the team while Smashley Simpson (Drew Barrymore) and Rosa Sparks (Eve) are both a lot of fun.

Whip It is fun and full of awesome relationships between women and for me, it’s a new favourite film. 5/5.