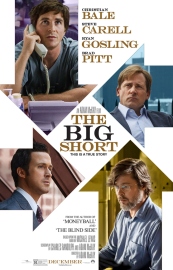 When a small group of outsiders saw what the media, big banks and government refused to acknowledge, they had an idea. The housing market wasn’t as stable as the banks liked people to believe and when these outsiders realised that, they invested and bet against the banks – if they were right it would lead to big money for them but it would also mean the end to capitalism as we know it.

There’s four groups of people who realise what’s going to happen to the housing market and they very rarely cross each other’s paths. Michael Burry (Christian Bale) is the eccentric hedge fund manage who makes the discovery that the US housing market is incredibly unstable and figures out a way to make money from that. His pitch is then discovered by trader Jared Vennett (Ryan Gosling) and he decides to get in on the action and one misplaced phone call alerts hedge fund manager Mark Baum (Steve Carell) to his plans and Baum and his team is convinced to join Vennett. The final set of characters The Big Short follows are young investors Charlie Geller (John Magaro) and Jamie Shipley (Finn Wittrock) who become involved with the credit default swaps with the help of retired banker Ben Rickert (Brad Pitt).

All these characters were interesting and determined with what they believed in even when other thought they were crazy. Baum and his small team were brilliant, they were all jaded by the banking system, though Danny Moses (Rafe Spall) is the optimist of the bunch, and the way they bounce off each other make them feel like real people who have been working together for years.

The Big Short is a great insight into the housing and financial crash of 2008. It blends humour and drama to make all the technical terms of “bonds”, “CDOs” and “credit default swaps” understandable. There’s celebrity cameos who break these terms down in a way that’s funny and interesting.

The way The Big Short is shot and edited often reminded me of a Michael Moore documentary. While you know these are actors playing these people, the rapid cuts to different images and the sometimes shaky camera makes it look more “real” and documentarian. Add the quotes that appear on screen every now and then and the often sarcastic humour, it really did feel like a Michael Moore Documentary. This isn’t necessarily a bad thing, it was just surprising and sometimes a little jarring.

The Big Short is funny, something that you might not expect from a film full of numbers and all to do with banking, but it really is often laugh out loud funny. The characters and their interactions are funny, the script is brilliant and there’s visual gags as well. Sometimes characters break the fourth wall and talk to the camera about their thoughts on what’s going on, sometimes this is funny while other times it pulls you out of the film a bit.

The Big Short has a great script and has some great performances – Steve Carell especially. It’s a good way to gain an insight in the housing and financial crash in 2008 and would work well as a double bill with Margin Call (2011). 4/5.