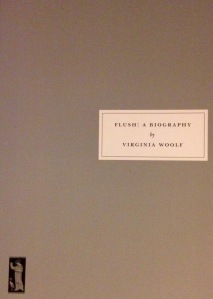 Flush is the semi-fictionalised biography of a spaniel called Flush who belonged to the poet Emily Barrett Browning. Through Flush’s eyes you see his life go from living in the English countryside, to the busy streets of London and finally to Italy.

Flush is an interesting story. It’s sometimes a bit hard to get into and that’s due to the fact it’s a biography so you sometimes have Virginia Woolf explaining something that has yet to happen or go into the history of something. That being said, Woolf’s writing can be really descriptive and beautiful – especially the final act in Italy, the cities of Pisa and Florence are described so vividly you really feel like you’re there.

Then there’s the fact it’s largely from the point of view of a dog. Seeing life from a dog’s perspective is interesting as you don’t really know what is going on a lot of the time, you don’t necessarily know what the people are doing or feeling and what’s their relationships with each other are. Flush loves his owner Emily and doesn’t like it when other people seem to upset her or get close to her, which was a nice touch as anyone who has had a dog knows that they can be very perceptive and protective.

I hadn’t read anything by Virginia Woolf before and I think this was a good way to ease myself into her writing. It’s a short book and has beautiful writing but it’s still sometimes hard to get into and to connect with Flush and the people in his life. 3/5.