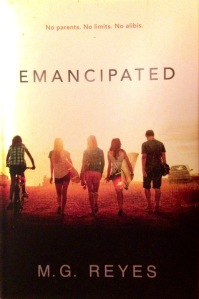 Six teenagers are legally liberated from parental control for very different reasons but they all have something in common, they all have something to hide. There’s step-sisters Grace and Candace who are looking forward to freedom and for Candace to get her big break in Hollywood, John-Michael who has recently become an orphan, wannabe rock star Lucy, tennis champ Paolo, and computer nerd Maya. They now live together in a house on the beach, looking forward to a life of freedom but their pasts soon start to catch up with them.

Emancipated is interesting because these six characters come from different walks of life and they really shouldn’t have ever met or had anything to do with each other, so there’s often misunderstandings or general awkwardness.

The teenagers in Emancipated feel very real. They lie and big themselves up about various aspects of their life like sex and relationships but at the same time they sometimes suck at communicating how they actually feel about someone they like. Also they aren’t always likable characters, they can be mean, rude or brutally honest which is refreshing to see because if you did have six teenagers in one house with no adult supervision, things will get a bit heated now and then.

The chapters alternate between the characters and are often short and snappy so help pull you into the story. Often a chapter with one character will end on a surprise and then you go to another character and see what’s happening with them. While sometimes you might want to stick with a character for a while, none of them are really boring.

The thing with Emancipated is, it’s great to go into it knowing as little as possible. There’s so many lies and secrets revealed (and there’s a lot that appears to still be hidden) as you read the book that sometimes you’re not sure who these characters are or how they really relate to one another.

Emancipated is a quick-read with intriguing characters and I’m looking forward to seeing what happens next in the sequel which is out later this year. 4/5.