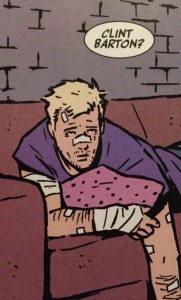 Obviously there’s a lot of different interpretations of Clint Barton in media, there’s animated TV shows, the Marvel Cinematic Universe and of course the comics. The first time I came across Clint Barton was in the awesome Avengers: Earth’s Mightiest Heroes TV series and I immediately fell in love. I’ve now gone on to read Matt Fraction’s Hawkeye comic run and various runs of Secret Avengers that feature Clint and of course the movies and I just love him a ridiculous amount.

There are many reasons I love Clint Barton but really it’s because he’s just a normal human who is very skilled at what he does and is a hero but he also makes mistakes and is sometimes a bit of a walking disaster. Clint always tries his best but sometimes life gets him down, he is after all just a normal guy running around with the Avengers. Clint is loyal, funny, self-deprecating and he is also a lot smarter than he appears to be. He sometimes keeps himself closed off but when he does trust and care about you he’ll do anything to protect them.

I think one of the reasons I will always want to protect Clint Barton when someone says he’s the most useless or boring Avenger, is because I see a lot of my personality in him and relate to him a lot – seriously, I always get Clint Barton in “Which Avenger are you?” quizzes. Clint Barton is just a guy with a bow with a terrible past, who tries to do the right thing but doesn’t always succeed – because he’s human – and he’ll always be one of my favourite characters.