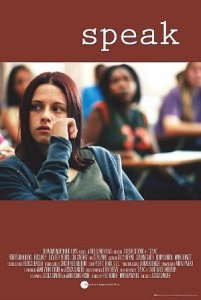 After a trauma over the summer that she’s trying to forget, Melinda Sordino (Kristen Stewart) becomes a selective mute. As she struggles with high school, broken friendships and her family, slowly she revisits what happens to her and tries to speak out.

Melinda is a teenager who has gone through a traumatic experience and really doesn’t know how to communicate what is going on in her head. While everyone else leaves her to get lost in her own head, her art teacher Mr Freeman (Steve Zahn) encourages her to express herself through her art. They have a sort of respect for each other and the art room becomes a place of sanctuary for her.

Speak is a great film because all the relationships are believable. Melinda’s parents Joyce (Elizabeth Perkins) and Jack (D.E. Sweeney) both don’t know what’s made Melinda so quiet but they don’t know how to push her to open up and at the same time they are both busy with their own lives that they don’t pay as much attention to her as they probably should. It’s not malicious, it’s just life. The way that teenage friendships can just fall apart is also handled-well. Suddenly people can go from one friendship group to a clique within a blink of an eye, that’s what happened to Melinda and she’s now on the outside looking in.

Speak is a phenomenal film. It’s the kind of film that showcases acting, direction and scriptwriting and shows that you don’t need a huge budget, just some talented people to make a film that can pack an emotional punch. Kristen Stewart is amazing as Melinda, there’s a scene where she locks herself in her closet and screams which makes your hair stand on end.

Speak is a powerful and inspiring drama and is the kind of film everyone should watch. 5/5.

It has been A Week and it’s #WorldBookDay so that’s the perfect excuse to buy some books - not that I ever need an excuse to buy books. The author of Three Summers is from Greece, the author of The Naked Woman is from Uruguay, and that big chonk of a book The Eighth Life’s author is from Georgia. I’m gonna be camping out the airport again next week so The Eighth Life will hopefully be the book that keeps me awake all night. #bookstagram #bookhaul #tbrpile #readtheworldproject #instabook #womenintranslation
Happy Christmas everyone! Hope you’re all having a lovely day. 🥰🎄🥂 Please enjoy these photos of a our Christmas tree and the fact mum decided to put Wonder Woman at the top of the tree this year 😁 (last year was Thor. I think it’s becoming a thing and each year it’ll be a surprise to see which funko pop character gets pride of place) #merrychristmas #christmastree #wonderwoman #christmas
Spent the day walking around Cambridge with a photographer for work. It was cold and windy but I think we got some great shots. This was the only time I felt I could take a half decent photo on my phone and not look like a fool next to the very nice professional #cambridge #stjohnscollege #rivercam #countryside #river #latergram
Sunday morning walk through town #cambridge #rivercam #winterwalk #swan #morningvibes #sundaymorning
Back home after a weekend up North to see my work wife @beedines 😊 Had a lovely time with her and Siân and the family as we explored #haworth and caught up on all the gossip! And I got a lot of cat cuddles courtesy of @zeusandarti too 😸 #yorkshire #visitengland #instatravel #travelgram #countryside #bestfriends
It’s been a week since the Laver Cup and I still don’t think I’m over it. I’d never been to a single tennis match before and I don’t think I’ll ever be to one like this again - unless I go to the Laver Cup next time it’s in Europe! 😉 The atmosphere was incredible (it felt more like a concert at times than a sports competition) and I definitely lost my voice and got sore hands and feet from all the shouting, clapping and stomping I did to cheer Team Europe on. It was brilliant to be able to see the teams on the sidelines, cheering their teammates on. We had a great view of the Team Europe bench and Rafa Nadal was the best cheerleader/coach anyone could ask for. There were so many great tennis matches, and having it all come down to the last match on the final day just added to the drama. Team Europe won it once again and the whole crowd was behind Sascha Zverev 100%. To be honest, the crowd was behind Team Europe more than Team World 99% percent of the time. We would clap or cheer when a Team World player played a good game or got a point but it’d never be as loud as when a Team Europe player did. I’d never heard anything like it when Roger Federer played (and won!) against Kyrgios but it makes sense as it was his home country. 🇨🇭 It really was the best weekend ever and it’s an experience I’ll never forget. ❤️ #lavercup #tennis #sport #lavercup2019 #geneva #teameurope
%d bloggers like this: