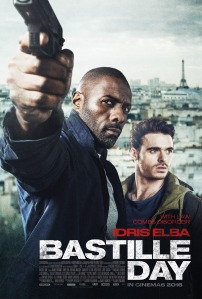 In Paris, pickpocket Michael Mason (Richard Madden) becomes involved with a terrorist plot when he steals a bag, unaware that it contains a bomb. Tough CIA agent Sean Briar (Idris Elba) must find Mason and figure out the truth before the bad guys and the French authorities close in.

Bastille Day is quite a bit of fun. It’s fast-paced and having characters like Mason and Briar who are complete opposites forced to work together gives you some great odd-couple moments. The way their scenes are shot makes the most out of their height difference and body differences which adds to the awkwardness to their interactions.

Bastille Day is a fast-paced, action-packed film. It’s not got the most solid or original plot but you get pulled along for the ride so you don’t really notice. The action sequences in Bastille Day are definitely a highlight of the film. There’s a rooftop chase early on into the film that’s exciting and a close-confined and brutal fight in the back of a van you can actually follow what is happening. When the action pauses to pull the plot along, that’s where it struggles a bit.

One thing I did appreciate about Bastille Day (and any film that does this), is that whenever there are characters whose first language isn’t English, and since the films set in Paris there’s a lot of French characters, they actually speak in their own language when not surrounded by English-speaking characters and the audience has subtitles to read. It makes sense that one French person, talking to another French person would speak in French, not in English with a dodgy French accent.

It’s kind of a cheesy movie but Elba’s presence and charisma is what helps hold the whole thing together and makes it enjoyable. 4/5.