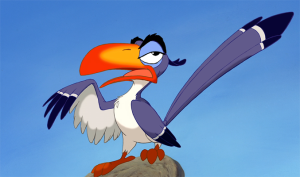 I’m sure there’s many a human character whose name begins with a Z but I went for an animated animal in what is probably my favourite Disney film of all time.

Zazu is a red-billed hornbill and is kind of like Mufasa’s adviser/secretary and Simba’s teacher. Like any teacher that doesn’t have much respect, Simba and Nala run circles around Zazu and he probably wants to hurt them as much as he wants to look out for them.

Zazu is one of those guys who can be annoying for sticking to the rules but he is also the sort of guy you can rely on and he probably has good ideas. And he is funny, it probably helps that Rowan Atkinson voices Zazu because his sarcastic British voice really brings Zazu’s attitude to life.

I love everything about The Lion King but I didn’t really appreciate Zazu or see how clever his humour was until I watched the film again as an adult. He’s definitely the kind of character that adults would maybe relate to more than children.