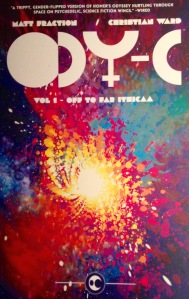 Now a century-long war has ended, Odyssia and her crew of weary warriors leave the battlefields of Troiia-VII for home – but getting there will be a long an dangerous road.

ODY-C is a space opera retelling of Homer’s The Odyssey, that may sound a bit crazy and weird and it kind of is. Now I haven’t read The Odyssey and only know the tiniest amount of the story so really I was going into ODY-C like it was an original and new story for me. Naturally I probably missed a tonne of the references to The Odyssey but one thing I did find interesting (once I’d got used to it) was that some of the text seems to be almost lifted from The Odyssey. The language of the narrator voice is the sort of thing you read in classics, the formation of the sentences sound old and important. That combined with the speech of the characters, which is more modern and often has swearing in it, is a weird and jarring experience. This was actually my second attempt at reading ODY-C (I tried last year but couldn’t get into it) and I think it was the language styles that was causing me problems.

The art in ODY-C is weird and wild. I don’t think I’ve ever seen anything like it in a comic or graphic novel. It’s vibrant and big, every inch of the page is full of colour, and the character designs are all very different. ODY-C is one of those comics where there’s so much to look at and the more you look, the more small details you notice. You definitely do have to pay attention to the art and how it’s set out on the page as sometimes the story goes across a double page spread.

In the world of ODY-C there are no men. All the Gods are women, even Zeus and Poseidon, which adds an interesting spin on things. Odyssia is a fearless warrior but she still makes mistakes, she leads her warriors into battle and she doesn’t suffer fools. The problem I had with ODY-C is that while there were dangers for Odyssia and her warriors because the Gods were meddling in their affairs, I didn’t really connect to the characters so I didn’t really care about what they were going through. Also there was sort of two plot lines, what Odyssia and her crew were going through and also the infighting and scheming the Gods were doing – out of the two I preferred the stuff with the Gods.

I feel like I should say ODY-C isn’t for younger readers, while the art is gorgeous and eye-catching there is also nudity and some gory scenes. Plus the way the more “olden style” language works could be confusing – I mean, I got confused to start with but maybe younger people will be fine.

ODY-C is a space adventure that may not be for everyone but if you like retellings and pretty art then it’s worth a look. 3/5.