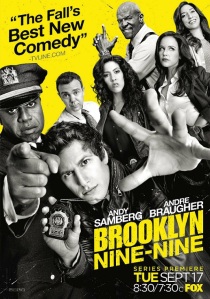 OK so I’m impatiently waiting for season three of Brooklyn Nine-Nine to arrive on Netflix after I binged watched the entirety of the first and second season in a matter of weeks. Brooklyn Nine-Nine is now one of my favourite shows and it has even become like a “comfort show” – if I feel a bit down I watch a couple of random episodes and I’m soon smiling and feeling better about life.

With the humour comes the opportunity to not make cheap, possibly offensive, jokes. Brooklyn Nine-Nine is so great because it calls out all the sexist, racist, homophobic humour you might get in other shows and in real life. Jake could easily be the arrogant womaniser but he really does care about his female friends and never belittles them, and he calls out other peoples’ bad behaviour. This gifset shows how Brooklyn Nine-Nine calls out multiple characters and situations and it’s wonderful.

Then there’s the stories. While each episode is kind of like a crime-of-the-week type deal and they are all pretty fun and even exciting, there’s the overriding story-arcs and relationships. Characters date different people and then break-up or there’s stuff like Terry’s family or Jake and his dad. It’s small stuff that develops over the episodes and you can see how these characters grow or what’s happened in their past to make them into who they are.

And that’s the main reason I love Brooklyn Nine-Nine so much – the characters. Jake is a great detective but is also a big kid, Amy is competitive and competent, Boyle loves food and loves his job, Rosa is a total badass, Terry loves his kids – both his twin daughters and the detectives under his charge, Captain Holt is serious and hard-working but he can still have fun with his team and then there’s Gina, Holt’s assistant when she isn’t attached to her mobile phone. Oh and I can’t forget Scully and Hitchcock, they’re the older detectives and many people think they’re kind of useless but that’s not always the case.

I love all of the characters and together they become a family, which is my favourite trope in fiction. Found families, that are a little dysfunctional and sometimes a little broken but they all care about each other are the best thing in my mind. The detectives of the Nine-Nine are all friends who trust and care about each other and it’s so nice to see a show where there’s no real conflict between the main characters.

In short, I love Brooklyn Nine-Nine so much because it’s fun, smart and I love the characters and their relationships. I cannot wait to see season three and see how this brilliant show continues to be amazing.