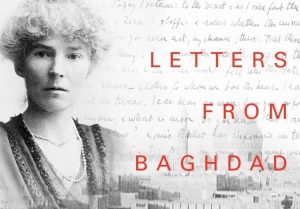 A documentary about Gertrude Bell, the most powerful woman in the British Empire who helped shape the destiny of Iraq after World War One.

Letters from Baghdad is an interesting blend of archive footage and letters from Bell and first-hand accounts from her friends and colleagues. Bell’s letters are a voice over from Tilda Swinton while the letters and accounts from other people are from actors, playing the part of the real historical figures as if they were being interviewed. It’s an interesting setup that takes a little while to get used to but having all these first-hand account soon pulls you into the rich history of Iraq and Gertrude Bell. Also Bell’s letters helps you feel more connected to her as she not only writes about her day to day life in Iraq but her opinions on the people she meets and how she does miss her family, her father especially.

Gertrude Bell is a woman I had never heard of before seeing this film. Bell travelled across Arabia, sometimes being accused of being a spy, working in archaeological digs and ended up being recruited by the British Government to draw the borders of Iraq. She knew T.E. Lawrence (aka Lawrence of Arabia) and Winston Churchill, she socialised with Muslim, British and German women alike and Iraqi royalty. It is a shame that she has been all but written out of history. She did a lot for Iraq including setting up the National Museum of Iraq practically single handed.

Letters from Baghdad is not only a historical documentary, it does shine a light on how British and American involvement in the Middle East has both aided and hindered the region throughout history, but it also looks at the attitudes of the time towards women in positions of power and who have independence, and how some of those attitudes have still not changed a lot.

If you want to learn more about Iraq’s history and a remarkable woman that has almost been forgotten from history, then do check out Letters from Baghdad. 4/5.

Letters From Baghdad – Official Trailer from Letters from Baghdad on Vimeo.