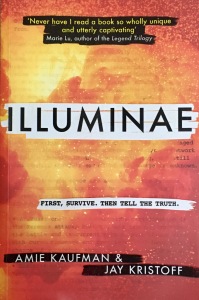 It’s the year 2375 and two mega-corporations are at war over a small, insignificant mining planet. Pity they didn’t warn the people living there. With enemy fire raining down, Ezra and Kady manage to make their escape on the evacuating fleet. But that’s just the beginning of their troubles. A deadly plague has broken out on one of the space ships, their ships protection is vulnerable and no one will say what is going on. As Kady hacks into the ships mainframe to try and find the truth it soon become clear that Ezra is the only one who can help her. The only problem is that they split up before the war started and she isn’t supposed to be talking to him.

Illuminae is very different from any book I’ve read before and that’s because of how it is written. It’s composed of instant message chats, surveillance footage summaries, interview transcripts, mission reports and more. Files look like they have been clipped into the book or have been printed off and stuck in. It’s really interesting and makes the book quick to read and adds a new spin on things.

It’s interesting how Kady, Ezra and other characters come across through what’s kind of like second-hand text. Kady is super smart and feisty and wants to know the truth about what’s going because both the good and the bad will affect her and her loved ones. Kady is also stubborn and believes she’s always right which does rub people, including Ezra. Ezra is almost the polar opposite of Kady and it’s difficult to imagine them as a couple (though opposites attract and all that I suppose), he follows the rules and doesn’t really question anything, especially when he’s conscripted into the military.

Illuminae is a super-fast read. That’s down to how it’s written, reading conversations through instant messages will always take less time than “proper prose” but also because it’s an action-packed book. It kicks off with a war and then there’s corporate espionage, military cover-ups and a deadly plague. It’s one thing after another that Kady and Ezra must work together to deal with and how they cope will test them and offer both funny and tense moments.

Illuminae is an exciting sci-fi book that has a lot of surprises and I can’t wait to read the sequel. 5/5.