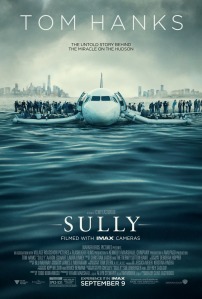 The story of Chesley Sullenberger (Tom Hanks), an American pilot who, along with his crew, became a hero after being forced to land a plane on the Hudson River in order to save the 155 souls on board.

The way this story is told is different to what one might expect. The film makes you wait, for what can feel like an excruciating long time, to see the full sequence of the plane coming down onto the Hudson. There’s snippets of flashbacks throughout the film, complimenting what’s happening in the present as Sully and his co-pilot Jeff Skiles (Aaron Eckhart) try and make sense of what happened, but you have to wait to the final act to see it all come together.

The sequence of the plane coming down is dynamic and thrilling and the special effects are top notch. The sequence, along with the whole film really, brings you that pleasure of seeing people being competent at their jobs and keeping their heads in a crisis. The aftermath of the water landing shows the best people have to offer with everyone pulling together and shows how regular tour boats came to the rescue.

Sully is an incredible true story and seeing the events in the air and learning about the hearings Sully and his co-pilot Jeff Skiles had to attend to prove they made the right decision is great. Director Clint Eastwood allows the true events to speak for themselves and manages to avoid most clichés often seen in autobiographical films. Sully is a polished film with a great performances and Tom Hanks is on fine form as always. 4/5.