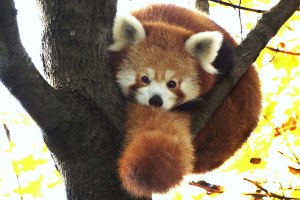 I love red pandas. They are my favourite wild animal (my favourite animal in general are dogs) and just seeing a picture of them puts a smile on my face.

I think the first (and only) time I’ve seen a red panda in real life was at Central Park Zoo in New York. They looked so cute snoozing in the trees and I instantly fell in love. They are such weird creatures when you think about it. They are very distantly related to the giant panda and while it’s stiped tail is a bit like a racoon it’s not really related to them either. I love it when animals, or nature in general, doesn’t really fit in the boxes we humans try and put it in.

I think red pandas are some of the most chill animals around yet they still get over excited or super surprised by little things – there’s the video of a red panda in Japan seemingly showing off to a rock which is adorable. I think that’s one of the things I like about them so much, they are a very gif-able animal – in fact there’s a Buzzfeed article of “The 27 Best Red Panda GIFs Of All Time” if you ever need something to make you smile.

Fun Fact: I had to get a cuddly red panda from the shop at Central Park Zoo because I’m a big kid and I named it Boris after the nice taxi driver we had that day.