Thanks to the Readathon News Twitter account (a great place to learn about different readathons happening each month) I heard about the Around The World-AThon readathon. The aim of this readathon is to read books that are either set in certain countries or the authors are from those countries and it’s the perfect thing to give me a push with my own Read the World Project.

The Around The World-AThon is hosted by Aprilius Maximus and Melbourne on my Mind and it runs from midnight wherever you are on Monday 15th May till 11:59pm on Sunday 21st May. There’s just two challenges for this readathon:
1. Read a book set within the set countries
2. Read a book by an author from an area within set countries

This is great for me as I haven’t read any books in these countries yet for the Read the World Project and while I don’t have a potential book for every country I’ve got a few to choose from. 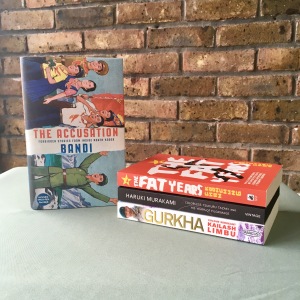 Colorless Tsukuru Tazaki and His Years of Pilgrimage by Haruki Murakami would fit for Japan, both as it’s set within the country and the author’s Japanese. I bought this book at least a year ago and I think I mainly picked it up because I liked the cover and the title was quite eye-catching.

The Fat Years by Chan Koonchung is a good book for China. I picked this up on the London Bookshop Crawl earlier this year and it sounds like it’s right up my street. It’s a kind of dystopian look at China with political commentary as well as humour.

The Accusation: Forbidden Stories From Inside North Korea by Bandi is a series of short stories about life in North Korea by a North Korean writer who smuggled the stories out of the country. I’ve heard amazing things about this book and while North Korea is often the butt of the West’s jokes, there’s still people living there in trouble.

Gurkha: Better to Die than Live a Coward: My Life in the Gurkhas by Colour-Sergeant Kailash Limbu would work for Nepal. I’ve been interested in the Gurkha’s and their history with the British army for a while now so when I discovered this autobiography I knew I had to read it.

So those are my four possible reads for the readathon. As usual, as long as I read one of them during the week I’ll be happy. That being said, with one of the books being a short story collection I might manage to make it two books read this readathon.

Anyone else going to be joining in the Around The World-AThon?