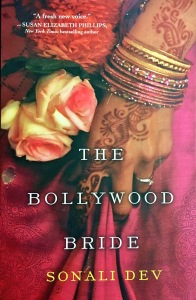 Ria Parkar is Bollywood’s favourite Ice Princess until one impulsive act threatens to ruin everything she’s built. Her cousin Nikhil’s wedding in Chicago, with the family, food and extravagant celebrations, is the perfect escape from the impending media storm. But being back in Chicago means facing Vikram Jathar. Ria and Vikram spend their childhood summers together, growing up their friendship turned into love until Ria made an earthshattering decision. Vikram believes she sold her soul for stardom but when they meet again, the passion is still there, no matter what Ria does to evade it.

Ria is an interesting character as while the book is from her point of view so you can see her inner-turmoil, she still often projects this poised and impenetrable persona. She’s not always a likable character but I found myself sympathising with her and understanding why she kept so many secrets and tried to keep people at a distance, even those who cared about her.

With Vikram, on the other hand, it took me a lot longer to warm to him. He’s justifiably angry but he’s also very stubborn and believes he knows everything when he often doesn’t. How he reacts to Ria coming back into his life is hurtful and frustrating for both Ria, and myself as the reader. Eventually you see a softer side to him but he’s a character that takes some time to like.

It was the family aspect of The Bollywood Bride that I really liked. I enjoyed the descriptions of all the things that go into a big, stereotypical Indian wedding and what being a part of such a huge extended is like. I loved all of Ria’s family and how they all come together to look out for each other and know each other so well.

In the last third of The Bollywood Bride there are some short but edging on explicit sex scenes. I don’t have a problem with that in a book but I was caught a bit off-guard by it – I think it’s because when I do read a romance novel it tends to be the more rom-com-esque type of book and if there are any heated moments, they tend to fade to black. Still the sex and romance in The Bollywood Bride was sensual and heated and you definitely could feel the connection between the characters.