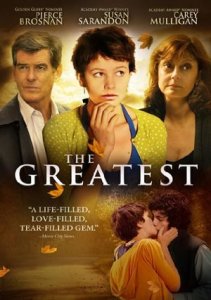 The Greatest is all about grief and how people deal with it in different ways. Allen refuses to speak about Bennett while Grace is single-minded in her mission to find out everything there is to know about her son’s death, rewatching the CCTV footage and talking to nurses and doctors about the night Bennett died. Both parents are so caught up in their grief, or in Allen’s case trying to ignore it, that they almost forget sbout their younger son Ryan (Johnny Simmons) who’s also struggling. Rose is also grieving for a love that has been brutally cut short but she has their child to think of. Sometimes Rose appears more level-headed than Grace and Allen put together.

The Greatest might be a bit predictable but the story is told with such sincerity that you can’t hold the usual genre tropes against it. This story of grief and hope is sometimes like a punch to your emotions and that’s down to the very talented cast. You feel all their pain and Carey Mulligan shows in one of her early film roles what a skilled young actress she is. The Greatest is well worth a watch. 4/5.