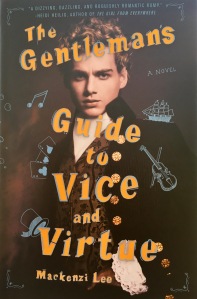 Henry “Monty” Montague was born and bred to be a gentleman, but he has too much fun for that. Neither being kicked out of the finest boarding schools in England nor his father’s disapproval can stop him drinking, gambling or waking up in the arms of women or men. As Monty embarks on his Grand Tour of Europe, along with his best friend Percy (who he may be in love with) and his younger sister Felicity, he has one final year of fun until he must return home and to be a part of his father’s business. But things go awry when Monty’s usual recklessness turns their trip abroad into a manhunt across Europe, putting himself and those he cares about in danger.

The Gentleman’s Guide to Vice and Virtue is so much fun. It’s set in the 1700’s which allows for a different kind of travelling adventure. They can’t get money easily, there’s now quick communication to back home if things go wrong so when you encounter highway men or pirates you’re on your own with just your wits.

Monty, Percy and Felicity are a great trio of characters with interesting dynamics. Felicity was the one I loved straight away. She’s a young lady due to go to finishing school when all she really wants to do is go to the school’s her brother has been kicked out of. But due to her gender and the times that’s not possible, no matter how smart and eager she is. Percy is the nephew of a nobleman but he has never really fitted in to high society due to his Barbadian mother. Even though his childhood must’ve been difficult he is warm and kind and cares about Monty a lot. Monty took longer to grow on me as the problems he ends up facing really help him grow and learn more about himself. He’s selfish and only thinks about how other people’s issues affects him, he’s a charmer and doesn’t think before he acts – all qualities that are often simultaneously infuriating and endearing.

Monty’s voice shines through in the writing, making this 500-page novel fly by. Also, the fact that Monty ends up in almost non-stop escapades definitely helps make it a book that’s difficult to put down. From England, to France and beyond their adventures and the mystery they uncover often verges into the absurd but it’s all told with such charm and wit that it ends up being quite brilliant. Along with all the excitement and threat of danger, there’s still quieter moments between the characters that show they aren’t necessarily cut out for this kind of thing but being together makes them stronger and better.

The Gentleman’s Guide to Vice and Virtue is a great historical adventure story with a bisexual main character, an engaging romance and a colourful cast of characters. 5/5.