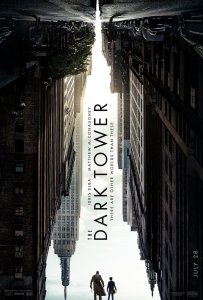 The Dark Tower is a fantasy adventure based on The Dark Tower series by Stephen King. I’ve only read the first book (you can find my review here) but there is a lot of stuff crammed into this film for its 90-minute runtime. This film is disjointed. It has weird editing in a single scene, cutting between conversations when there doesn’t appear to be any need to, never mind the fact that it jumps from character, to place and there’s often no real connection between them.

Idris Elba is great in this and, from reading only one book in the series, I feel he does the best with what he’s given and is actually a really good Roland. McConaughey on the other hand, just seems to be playing himself. There’s no menace in him and there’s no real tension between him and Elba, he’s just there.

There are action sequences, and for the most part they look OK but some of the CGI is bad and noticeable, especially during the fight between Roland and the Man in Black. The problem is they’re never particularly exciting, they just happen. Also, the most interesting moments are all featured in the trailer so there are very few surprises.

The main problem with The Dark Tower was that it was dull and forgettable. There’s a lot of stuff that could be interesting but is never developed so you’re left with a fantasy world that’s pretty bland. The Dark Tower drags and Idris Elba’s performance is not enough to elevate it. 2/5.