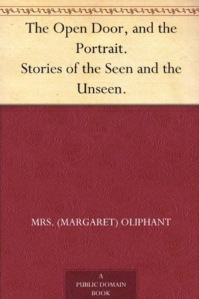 The Open Door, and the Portrait: Stories of the Seen and the Unseen are two short spooky stories.

The Open Door is from the perspective of Mortimer a father who’s brought his family to live in an old Scottish manor but when his son is taken ill, having apparently heard a lost spirit, Mortimer promises to solve the mystery and help the lost soul. The Portrait is about Philip, a man who returns home to his elderly father and becomes enchanted by the portrait of his dead mother who he never knew.

Both stories are eerie and are set in old, manor houses that hide their secrets and have male leads that like to believe they are sound of mind but maybe that’s not the case.

Out of the two stories I preferred The Open Door. It was a creepy ghost story that made full use of its setting in the wilds of Scotland, owls hooting, characters not wanting to believe the stories and a child that has seen things that can’t be explained. I also liked that when Mortimer was investigating his sons claims and talked to people who worked for the house, the way it was written you could clearly see the thick Scottish accent. It was another thing that helped pull me into the story.

The Portrait was more of a mystery than a horror story. There were hints at supernatural goings on but it was Phillip and his relationship with his father that was the main focus of the story. Also, while obviously a lot happens in a short space of time in a short story, I found the ending of The Portrait felt quite rushed and not that satisfying.

Still, I did enjoy reading The Open Door, and the Portrait: Stories of the Seen and the Unseen. I haven’t read any Victorian fiction out of choice before (definitely read some during my school life) and these short stories were a nice way to dip my toes in as it were.

I want to say thank you to Bex over at NinjaBookBox as it was this post that made me aware of Margaret Oliphant. I will be checking out the other books and authors mentioned in the post.