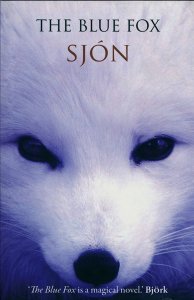 The Blue Fox follows two storylines; one follows a hunter, Reverend Baldur Skuggason, who’s tracking a rare blue fox, and the other follows Fridrik, a man who cares for Abba, a young woman with Down syndrome who he rescued from a shipwreck. It’s not obvious to begin with how they are all connected but as the story progresses, everything becomes clearer in this snowy landscape.

The Blue Fox is set in 1983 in Iceland and the writing is quite beautiful, though sometimes it’s just as harsh as the Icelandic winter the story takes place in. One such harsh moment is how it talks about people with Downs syndrome. Yes, it may be period-typical but it was still a shock, especially when there was writings from a medical journal, theorising how and why someone is born with Down syndrome.

The snowy mountains of Iceland where Skuggason hunts the fox are just as much a character as any of the humans. The atmosphere is chilling, and the writing puts you right there next to the hunter in the snow. The fox is a character as well, as there are some pages devoted to its point of view, making it not just this prize to be won, but a creature that you manage to care about in a few short pages.

The Blue Fox is a short book at just over 100 pages long. I enjoyed the portion about the hunter and the fox more, especially when things go a bit weird and you’re not sure what’s real and what’s not, but when you finally see what the connection is between Fridrik, Abba and Skuggason it makes Fridrik and Abba’s story more interesting. 3/5.