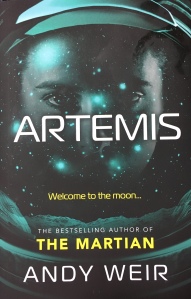 Jazz Bashara is the best smuggler in Artemis – the first and only city on the moon. Life’s tough if you’re not a rich tourist or a billionaire, so smuggling in the occasional bit of harmless contraband helps cover her debts and pay the rent. Then Jazz gets the chance on commit the perfect crime, with the pay-out being too lucrative to turn down. But pulling off the impossible heist is just the start of her problems, as things go wrong and her life becomes endangered. Soon Jazz discovers a conspiracy in Artemis, and her only chance at survival lies in a scheme even riskier than the first.

I was so excited about Artemis when I first heard about it. It’s about a heist (I love heist stories) on the moon (it’s always cool having stories set in space) by the guy who wrote The Martian (one of my favourite books I read over the past few years). Unfortunately, it didn’t live up to my expectations.

I found it difficult to get into Artemis, mainly because I couldn’t get used to Jazz’s narrative voice. It’s very conversational as if she’s talking to someone else. It is quite similar to Mark Watney in The Martian – but there was a reason his voice was like that, he was recording himself. With Jazz it felt forced, the humour didn’t land a lot of the time and the way she talked about herself and her body was weird and in my experience, not how women generally talk about themselves.

Naturally there’s technical and science jargon but the way it’s explained makes it pretty accessible and easy to understand. However, there is a lot of it and it can bog down the action and I found myself skim-reading it more often than not. The heist itself was pretty good and I didn’t see many of the twists and turns coming as things naturally went wrong for Jazz and her plans.

Artemis is just a bit meh. The whole idea of a city on the moon is really cool and the way the city is described makes it vivid and exciting but the story itself is just OK. Jazz is more grating than a sarcastic hero the book tries to make her out to be and I couldn’t connect to her or any of the characters really. Artemis was an alright book, but it was a disappointing one for me. 3/5.