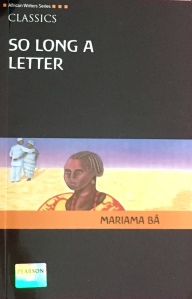 Recently widowed Ramatoulaye, writes letters to her childhood friend Aissatou chronicling her life and her struggle for survival after her husband Modou decided to take a second, much younger wife.

So Long a Letter is a very short book. At 95 pages it’s a reasonably quick read, once you’ve learnt who’s who in Ramatoulaye’s life. She has a dozen children, and then there’s the friends and family of her husband’s second wife as well, there’s a lot of characters for such a short book.

So Long a Letter is all about women, their relationships and their struggles with living in a social environment where the attitudes and values that dominate, deny them little independence. What I thought was clever was that it would’ve been very easy for Ramatoulaye to hate her husband’s second wife, but instead she almost pities her and leaves the hatred and bittiness towards her husband. That’s not saying Ramatoulaye is best friends with the woman, she doesn’t like her but she can see that she’s just as much a victim of circumstance as Ramatoulaye is herself.

Ramatoulaye’s relationships with her daughters is lovely. She makes mistakes as a mother but she doesn’t try and shield them from the world and there’s some great moments between her and her daughter Daba. Daba is forceful and forward-thinking, and it was interesting to see her grow and get in a relationship of her own.

So Long a Letter was a bit weird to start with as while Ramatoulaye was chronicling her own life story in these letters, it involved “telling” Aissatou so of the events that happened in her own life. Obviously, it was so us as readers could get a better understanding of these two women and their history, but it felt weird that someone was recounting someone else’s major life events back to them.

So Long a Letter was like a quick snapshot into the lives of women in Western African society in the late 1970’s. It was nice being a part of Ramatoulaye’s life for a while, see both her struggles and her strength, but it wasn’t really an engaging or memorable book.