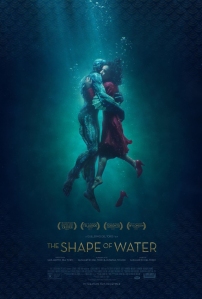 The Shape of Water has a magical quality to it. The setting and particularly the music, gives it almost a golden age of Hollywood feel. Especially as the story is almost a classic story of love, friendship and good trying to triumph over evil. It’s almost like a fairy-tale and the way the film is bookended by some narration definitely adds to that feeling.

All the performances in The Shape of Water are great. Sally Hawkins does a brilliant job at conveying Elisa’s thoughts and feelings without ever saying a word. You believe in the connection she’s forming with this creature and seeing the two of the bond is lovely. Michael Shannon’s Strickland is a menacing presence from the first moment he appears. Every time he’s on screen your eyes are on him as he’s like a coiled spring ready to explode at any moment.

The Shape of Water is a bit tonally uneven. At its centre is a sweet story but then there’s sudden bouts of blood and violence – most of which are courtesy of Strickland. It’s also got some surprising moments of humour, a good number of them were from Elisa’s neighbour Giles (Richard Jenkins) who’s friendship with Elisa is lovely.

The Shape of Water is one of those films where I appreciated it more than I liked it. While for many it is one of their favourite films of the year, for me it was a lovely film with a lot of heart, but I don’t think it will stick with me for very long. 3/5.