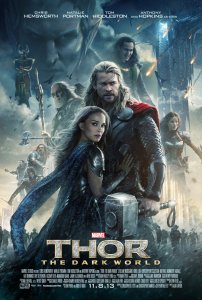 When Dr. Jane Foster (Natalie Portman) becomes possessed by an ancient and powerful entity known as the Aether, Thor (Chris Hemsworth) must team up with his brother Loki (Tom Hiddleston) to protect her from the genocidal Dark Elves led by Malekith (Christopher Eccleston), who wants the Aether to throw the Nine Realms into darkness.

Thor: The Dark World finds Loki in prison for his crimes against Earth and his relationship with Thor is put to the test when he is the only one who can get them off Asgard undetected. Loki continues to be one of the most interesting and complex characters in the MCU. The one thing you can guarantee Loki to be is untrustworthy but the way that presents itself is still surprising.

While the Dark Elves do look aesthetically cool and somewhat intimidating, that doesn’t make them good or compelling villains. Malekith has no motivation besides turning the universe into darkness because that’s what he and his people thrive on, not matter the effects on different people. A lack of a decent villain makes this a typical end of the world type story. Algrim (Adewale Akinnuoye-Agbaje), Malekith’s second in command, is reduced to a henchman and offers little opportunity for Akinnuoye-Agbaje to show how good an actor he is.

A nice call-back to the events in The Avengers is, like Tony Stark in Iron Man 3, the fact that Erik Selvig (Stellan Skarsgård) is suffering from having a God in his head. This reminds us that while the main heroes and villains of this story are Gods and monsters, there are humans here that have very human reactions to the fantastical things they face.

Thor is almost second fiddle to most of the characters in Thor: The Dark World despite being the titular character. Loki proves to be the more interesting and funny brother while Jane Foster saves the day with science. Still, Thor is suitably heroic and the final battle between him and Malekith is both funny and thrilling, thanks to the laws of physics being turned onto their head.

Thor: The Dark World is a more serious film, it even has a darker palette and it definitely likes that mouldy green colour that’s almost ever-present. It still has sprinkles of humour throughout and some good action sequences but it’s an average outing for Thor. 3/5.