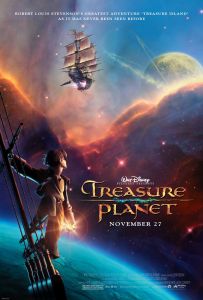 When Jim Hawkins (Joseph Gordon-Levitt) discovers a map to a legendary pirate’s treasure, he embarks on a journey with a crew led by Captain Amelia (Emma Thompson) to find it. But danger is close with John Silver (Brian Murray) on board.

Everything about this film is wonderful!

Treasure Planet is an adaptation of Robert Lewis Stevenson’s Treasure Island and it’s a story that works surprisingly well in space with it’s larger than life characters and the action and intrigue. Jim is a great character as his experiences shape him, he grows from being a young rebel dreaming of adventure to someone who puts his life on the line for others.

Jim’s relationship with John Silver is brilliant too. The film does a great job of showing how Silver isn’t a one-dimensional villain and while he may be desperate for treasure, he may also start to care about Jim as well.

The animation style is great as it’s a mixture of traditional hand-drawn and computer animation. The human characters are hand-drawn while more mechanical characters are made from CGI, these two styles along with the gorgeous colours of space makes everything on screen look beautiful.

The two songs featured in Treasure Planet by John Rzeznik from the Goo Goo Dolls are fantastic and I’ve been listening to them almost non-stop since I watched the film. I’m Still Here is like a gut-punch when you hear it during the film as you really see and feel what Jim is yearning for. The score is also great and it’s suitably epic and beautiful.

I missed Treasure Planet when it was first released over 15 years ago. I didn’t watch a lot of early 2000’s Disney films – I think I thought I was too old for them – and I’m annoyed at my younger-self as I was missing out on a thrilling adventure with great characters and stunning worlds and technology. Treasure Planet is now one of my favourite Disney films, it’s up there with The Lion King and The Beauty & the Beast for me. Treasure Planet is a great adventure and I loved every second. 5/5.

Leave a Reply to Lauren @ Always Me Cancel reply