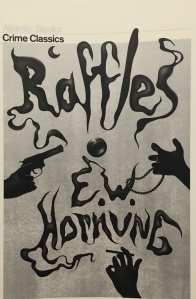 A collection of short stories about A.J. Raffles, a cricketeer and gentleman thief, who doesn’t need to commit burglaries and steal money and jewels, but enjoys the rush of it, and his former schoolmate Harry “Bunny” Masters who he ropes into being his accomplice.

Written in the 1890’s, these stories are set in Victorian London and they’re a lot of fun. Raffles is a charming, loveable rogue, he likes to gamble and take risks. He’s a very cunning guy who can read people and is usually one step ahead of everyone else – especially, Bunny.

Bunny is the one downside to these stories. They’re told from his point of view I found him a bit wet as he kept flip flopping between enjoying his escapades with Raffles and then getting a conscience and panicking about what he’s involved with. Bunny is also not particularly trusting of Raffles when it comes to the crimes they’re planning to commit together. Part of that is because of a lack of communication between the two, Raffles rarely tells Bunny all his plans so Bunny then acts in a way that may put them both in danger, so you can see where Bunny’s frustrating is coming from.

Possibly because of the Victorian setting and how Raffles know London like the back of his hand, this collection reminded me of Sherlock Holmes – especially the films featuring Robert Downey Jr. and Jude Law. There’s also the dynamics between the two main characters, there’s some similarities between how Holmes and Watson act and how Raffles and Bunny act, however Raffles definitely talks down to Bunny more than Holmes does with Watson.

All the stories are no more than 25 pages long so they’re fast-paced and get to the crimes themselves very quickly. The crimes are often clever and don’t go the way you’d expect. Naturally there’s some stories I enjoyed more than others and it took me some time to get used to the Victorian vernacular, but they were all engaging reads and I loved the adventurous and often over-the-top vibe these stories had. 4/5.