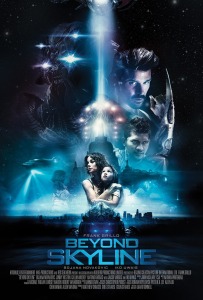 When LA detective Mark Corley (Frank Grillo) and his son Trent (Jonny Weston) get caught up in an alien invasion, they must fight to survive.

Beyond Skyline is a kind of sequel to 2010’s Skyline which featured different characters but the same alien invasion. You don’t need to have seen Skyline as Beyond Skyline it is its own thing (a thing that’s a lot better than the original), but it does tie to some of the events of the previous film surprisingly well.

Where Beyond Skyline really succeeds compared to its predecessor is that it has a core group of characters you actually care about. Mark and his son have a fraught relationship, but Mark will do anything to keep Trent safe – Frank Grillo is as great and as charismatic as always. There’s subway conductor Audrey (Bojana Novakovic), and freedom fighter Sua (Iko Uwais) and his sister Kanya (Pamelyn Chee), all of whom getting the lightest of backstory but due to their chemistry with each other, and the actors talents, make them characters you want to survive.

The action-sequences are top notch, especially the ones featuring Uwais and Yayan Ruhian, both of whom star in martial art, action film The Raid. The fights are interesting, well-shot and thrilling. The fact that it’s often physical beings these characters are fighting rather than CG-creations, makes it a more authentic encounter, and one that feels like it has more consequences to it.

There’s a good mix of digital and practical affects in Beyond Skyline. The CGI is generally quite good, and the practical effects are very creative. Together they bring to life these alien creatures and their ships, making them a menacing adversary to the people on earth.

Beyond Skyline is fun, exciting and pure bonkers sci-fi. Yes, the actual plot might not hold up under close scrutiny, but it’s a fast-paced adventure that’s thrilling and has a surprising number of emotional beats. 5/5.