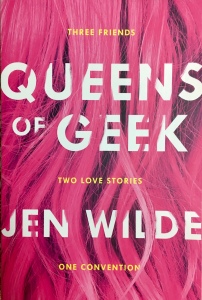 Best friends Charlie, Taylor and Jamie are heading to SupaCon! Charlie is a blogger and actress promoting her first film at SupaCon and it’s her chance to show the fans she’s completely over her breakup with co-star Reese Ryan. When she meets super famous online personality Alyssa, Charlie begins to think her long-time crush isn’t as one sided as she thought. Taylor’s more reserved than Charlie. Her brain is wired differently making social situations often terrifying and a fear of change makes her constantly re-evaluate what she wants from her best guy friend Jamie. But when she enters a fan contest to meet her favourite author, Taylor begins to rethink her lifelong goal of always playing it safe.

Queens of Geek is a super quick read, I flew through it. It’s all set during one weekend at a fan convention called SupaCon so there are a lot of geeky references to comics, cosplay and fandom in general. It’s kind of a love letter to fandom, and how people can find safety and comfort in fandom and the TV shows/films/books that people can bond over. It’s a nice looking into the world of comic cons and how they can be very overwhelming but also be a place to meet likeminded people and make new friends.

The story is told in alternate perspectives, Taylor and Charlie’s. Taylor has anxiety and Asperger’s and it’s insightful hearing her explain how she feels in certain situations and about life in general. She’s almost constantly struggling but still loves her friends and her fandom. Taylor is bisexual and has had a past relationship with a boy and during her time at SupaCon gets to know Alyssa. Their romance is really sweet and they both talk about how their past relationships have affected them and what they’re looking for going forward.

The amount of communication between Taylor, Jamie, Charlie, and Alyssa (and all combinations of thereof) was extraordinary. Any misunderstandings are more likely to last a couple of paragraphs than a couple of chapters. It’s both great to see a solid group of friends or a potential love interest be so open about their thoughts, feelings and fears with one another, but also a bit disconcerting as it’s something that is (unfortunately) so unusual in fiction, and often in real life as well. So often one character gave an encouraging speech to another character that it felt unrealistic.

Queens of Geek is definitely a character driven book. There’s not really any plot twists or big moments, instead it highlights various important diverse topics like sexuality, mental health, body image and unhealthy relationships. All these topics are handled well but the story sometimes felt like it had been put on the backburner in order for a character to say their piece about a certain topic.

Queens of Geek is a cute, quick read with some great characters who really support one another. Jamie, Charlie and Taylor have a solid friendship and each of their personalities shines through. However, it’s not a memorable read for me as it felt like it was trying so often to tick as many important, diversity boxes as possible that it didn’t end up grounded in reality. 3/5.