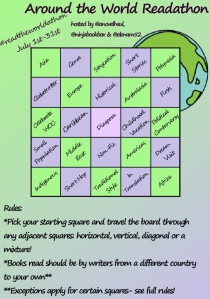 The #ReadTheWorldAthon I’m co-hosting with A Novel Haul and Ninja Book Box starts in two weeks so I thought I’d share some recommendations that fit the various squares on the readathons bingo card. For more information on the readathon and more in-depth explanations of each square, take a look at my announcement post. Below are 22 books that fit 22 of the 25 squares, where a book can fit multiple squares, I’ve made a note of which one it. That way you’ve got more choice when planning your readathon.

Asia: Gurkha: Better to Die than Live a Coward by Colour Sergeant Kailash Limbu – Nepal. An autobiography of a Gurkha. Can be used for: non-fic.

Polynesia: Free Love by Sia Figel – Samoa. The story of a teenage girl embarking on a forbidden relationship. Can be used for: Celebrate Women of Colour.

Europe: The Keeper of Lost Causes by Jussi Alder-Oslen – Denmark. A new unsolved crimes unit’s first case is the case of a politician who has been missing, presumed dead, for five years. Can be used for: In Translation and genre fic.

Australasia: Gould’s Book of Fish: A Story in Twelve Fish by Richard Flanagan – Australia. A convict on Van Diemen’s Land in the 1830’s becomes a reluctant painter of fish. Can be used for: historical.

Caribbean: Papi by Rita Indiana – Dominican Republic. A story about a young girls relationship with her absent father. Can be used for: Celebrate Women of Colour.

Middle East: Persepolis by Marjane Satrapi – Iran. Autobiographical graphic novel about Satrapi’s life growing up in Iran in the 1970’s and her time in France. Can be used for: non-fic and Celebrate Women of Colour.

Americas: Death Going Down by María Angélica Bosco – Argentina. A murder in an elevator puts the whole apartment block under suspicion. Can also be used for: In Translation and Genre.

Africa: Homegoing by Yaa Gyasi – Ghana. A family saga spanning multiple generations following the descendants of two sisters, one who married a rich European and the other who was sold into slavery. Can be used for: Celebrate Women in Colour and historical.

Staycation: Noughts and Crosses by Malorie Blackmann – England. A dystopian story set in alternate 21st-century Britain where the Crosses (Blacks) and the Noughts (Whites) are segregated with her Crosses in power. Can be used for: Celebrate Women of Colour and genre.

Short Stories: The Accusation: Forbidden Stories from Inside North Korea by Bandi – North Korea. A collection of short stories about life in North Korea. Can be used for: Asia, In Translation and Political Controversy.

Globetrotter: All Day at the Movies by Fiona Kidman – New Zealand. When a war widow moves to work on the tobacco fields, her act of independence triggers a ripple effect whose repercussions resonate long after her death, forever shaping her children’s lives. Can be used for: Australasia and historical.

Historical: Sirius by Jonathan Crown – Germany. The story of a dog who was a part of a Jewish family, became a movie star and met Hitler. Can be used for: In Translation and Europe.

Genre: Lagoon by Nnedi Okorafor – Nigeria. Science-fiction about aliens arriving in Lagos. Can also be used for: Celebrate Women in Colour and Africa.

Non-fic: Street Without a Name by Kapka Kassabova – Bulgaria. Autobiographical account of Kassabova’s childhood in Bulgaria during the last few years of the Cold War, and then revisiting her home country decades after leaving it. Can also be used for: Europe

Firsts: Metro 2033 by Dmitry Glukhovsky – Russia. Set in the Moscow metro system, the last survivors of a global nuclear holocaust begin to think they’re not alone in the tunnels. This is Glukhovsky’s first novel. Can be used for: Europe and genre.

Childhood Vacation: The Shadow of the Wind by Carlos Ruiz Zafón – Spain. I had my first birthday in Spain (not that I remember it but there’s photographic evidence) and it’s a country I visit every year since my dad moved there over 15 years ago. It really is my home from home. Can be used for: In Translation and Europe.

Political Controversy: The Devils’ Dance by Hamid Ismailov – Uzbekistan. Ismailov’s work has been banned in Uzbekistan and he was forced to flee the country in 1992 after the authorities believed he was trying to overthrow the government. Can be used for: Asia, historical and In Translation.

Small Population: Frangipani by Célestine Hitura Vaite – French Polynesia. The story of a woman’s relationship either her daughter. Can be used for: Celebrate Women in Colour and Polynesia.

Dream Visit: México 20 by multiple authors – Mexico. A collection of short stories and non-fiction about life in Mexico. Can be used for: short stories, Americas and In Translation.

Short Hop: Asking For It by Louise O’Neil – Ireland. A teenage girl struggles to piece together what happened to her after she wakes up on her front porch, in pain and the photos of the night are all online. I live in the UK so Ireland’s just a trip across the sea for me. Can be used for: Europe.

In Translation: The Blue Fox by Sjón – Iceland. The story of a hunter and a a rare blue fox. Can be used for: Europe.

Celebrate Women of Colour: Reading the Ceiling by Dayo Forster – The Gambia. On her eighteenth birthday Ayodele plans to lose her virginity but she has three men to choose from. The story follows three paths, following how her life might turn out depending on which man she chooses. Can be used for: Africa and genre.

I’m afraid I don’t have any recommendations for Diaspora, Indigenous or Traditional Style. These three are areas I’m unfamiliar with and I want to use the readathon to rectify that.

If you have any recommendations for books that fit Diaspora, Indigenous or Traditional Style, or any of the bingo squares really, I’d love to hear them.