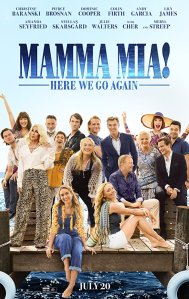 As Sophie (Amanda Seyfried) prepares to open the hotel on a Greek island like her mother Donna (Meryl Streep) always dreamed of doing, she learns about how her mother as a young woman (Lily James) discovered the island and found love and heartache along the way.

Mamma Mia! Here We Go Again is the sequel to the hit 2008 film Mamma Mia! and it manages to be a sequel and a prequel at the same time. Nearly the entire cast of the original film are back, and their chemistry is just as good all these years later. There’s some fun editions too with Andy Garcia as the hotel manager and Cher as Sophie’s grandmother. The young cast all do a fantastic job of bringing their own take to the characters we already know. Lily James has big boots to fill with Donna, but she is great as a young Donna who is fun, adventurous and loving. The moment when she starts singing “Mamma Mia!” when she’s broken hearted but then turns it into a moment of strength and joy is infectious.

The songs here are a mixture of the well-known ABBA songs, a lot of which were naturally featured in the first film, and some lesser-known B-sides but they were no less enjoyable. There’s a combination of sad songs and the toe tapping feel-good songs that will have you dancing in your seat. The songs, the drama and the characters all come together to make Mamma Mia! Here We Go Again just as entertaining as the first film.

Mamma Mia! Here We Go Again is a love letter to the relationship between Sophie and Donna. They have such a wonderful mother/daughter relationship and this film manages to make you cry over them. It’s beautiful to have this relationship being the heart of the film, and the story works so well because both characters don’t have to be on screen for you to see how much they mean to one another.

Mamma Mia! Here We Go Again is a film that plays with all your emotions. It’s surprisingly sad and touching at times but overall it is a funny and joyful film that makes you forget that the real world isn’t all blue skies and dance numbers for the moment. 5/5.