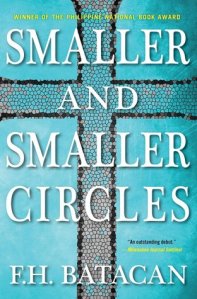 The body of a young boy is found dead in the landfill in a poor district outside of Manilla. His face has been cut off, and his heart and genitalia removed. The police are stretched thin and are unsure of what to do, but as another boy, and then another boy, is discovered with the same injuries, the police need help. Father Gus, a forensic anthropologist, and Father Jerome, a psychologist, are asked by the Director of the National Bureau of Investigations to help the police in their efforts to track down the killer before they strike again.

Set in the late 1990’s there are quite few subplots in Smaller and Smaller Circles. There’s naturally the main plot of these murders and the police’s attempts to solve the case with the help of Father Gus and Father Jerome, but there’s story threads about the police and the Catholic Church too. The fact that the police in the Philippines don’t have good filing systems or good communications with the various departments places a major role in the story, and then with regards to the Church there’s a priest that Father Gus believes is using his power and influence to get away with abusing young boys he has access to.

Father Gus and Father Jerome are both compelling characters and are both smart in their own ways. They make each other better, bouncing ideas off one another until they might get a clearer idea of any patterns or motivations regrading the killer and their victims. Their easy camaraderie is great to read about and it’s fun to see how they manage to juggle working at a university and all the things that come with that like marking papers and getting funding, and with helping the police on serious crimes.

Smaller and Smaller Circles is a well-paced mystery as you as the reader have the same amount of information as the police and Father Gus and Father Jerome, and when they do have a suspect they spend the time trying to catch them and get concrete evidence. This makes the final part of the book tense as you wonder whether they’ll get to the killer before he kills again. Also, it means the ending isn’t rushed and various characters do have some form of closure.

Smaller and Smaller Circles is a bit gruesome. The bodies are described vividly but clinically and there’s some unsettling characters too. It’s not too scary or creepy and instead is a good mystery that’s set in a place where crime stories aren’t usually. In fact, Smaller and Smaller Circles is credited with being the first Filipino crime novel. It brings in the politics and socio-economics of the Philippines into the story in a way that fleshes out the setting and characters but isn’t something you need to have prior knowledge of to see how a lot of these characters lives are affected by forces outside of their control. 4/5.