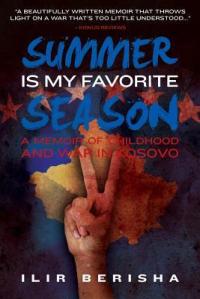 Summer is my Favorite Season is the true story of Ilir’s childhood growing up in Pristina in Kosovo. He lives with his parents, his older brother Shpetim and his little sister Fjolla but their lives are disrupted when Serbian forces take to the streets and they begin to hear rumours of villages burning. Their lives are changed when they, ethnic Albanians living in the Kosova region of the former Yugoslavia, are treated like second-class citizens when Slobodan Milošević and his government came into power.

I knew nothing about the Kosovo War in the late 1990s and about the events leading up to it that started in the mid-1980s. The fact that Kosovo isn’t recognised by Serbia as an independent state and that there’s still tensions today (in this years World Cup two Swiss footballers of Kosovar-Albanian heritage celebrated their goals against Serbia by locking their hands together and flapping their fingers, in a gesture to resemble the two-headed eagle on Albania’s national flag) isn’t something that had passed me by, but the conflict and tensions were something I didn’t understand.

As Summer is my Favorite Season is a memoir, it doesn’t go into extreme details of how and why the conflict started, instead it’s told through the eyes of a child and that makes it so much sadder and affecting. Things happen slowly and Ilir doesn’t even know or understand what a tank is when one park outside his family’s apartment building. It becomes part of the view from his window. He doesn’t understand why his father is always so focussed on the news or his mother can’t go to work, and it takes time for the affects of the conflict, which for a time was in the villages away from his family, to trickle into his life.

Summer is my Favorite Season is a tough read. The things Ilir and his family went through is heart-breaking, and as he says, they’re some of the lucky ones who managed to get out of the country. They have friends, neighbours and family who are killed. They experience police harassment, and when NATO acts there’s bombs dropping so close to their home the windows shatter. The emotions Ilir goes through during his childhood are vivid, he’s scared, angry, confused, and when it’s all over he has nightmares. The affects of the conflict on him and his family is plain to see and it’s horrible to think about the thousands of people who didn’t survive.