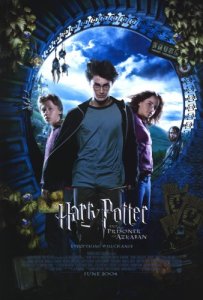 It’s Harry’s (Daniel Radcliffe) third year at Hogwarts and it brings a new Defense Against the Dark Arts teacher, Professor Lupin (David Thewlis). But there’s danger for Harry as convicted murderer Sirius Black (Gary Oldman) has escaped from Azkaban prison and is coming after Harry.

I will preface this review by saying that not only is Harry Potter and the Prisoner of Azkaban my favourite book in the series, it is also my favourite film. So potentially this “review” is a little biased.

There’s a lot of new, and important characters introduced in Prisoner of Azkaban. Both Lupin and Black have history with Harry’s parents, giving him an emotional connection to them both. The Dementors are also introduced and they are some scary creatures that from the outset you can see the affect they have on people. They can suck the soul out of someone and with their black cloaks and hooded figures, they are very much like the grim reaper.

Directed by Alfonso Cuarón, there’s some dark and scary imagery in this film. In one of the first scenes where Harry is near a park, the creaking sounds of the swings and the roundabout moving in the wind instantly shows what sort of tone the film’s going to have. There’s some beautiful imagery in Prisoner of Azkaban too, the scene where Harry’s flying on Buckbeak the Hippogriff is stunning and the scenes with the Dementors circling Hogwarts as plants wither and die as they pass over them is incredibly eerie yet beautiful.

Everything about Prisoner of Azkaban is more mature. The young cast have grown up a bit since the last film and are more assured in their performances. The tone of the film is darker, gone are the bright colours of the previous two films, instead the landscapes are more muted and Quidditch is played in the rain.

There’s a lot of little things that I love about Prisoner of Azkaban. Like there’s a few scenes of Harry, Ron (Rupert Grint), Neville (Matthew Lewis), Seamus (Devon Murray), and Dean Thomas (Alfred Enoch) hanging out and having fun which makes them all feel like actual friends who’ve known each other for a few years now. I like how when the kids are wearing their uniforms, they aren’t all neat and tidy anymore, instead ties are loose, shirts are untucked, and sleeves are rolled up, making each character feel like a real teenager at school. Everyone’s hair is perfect book-hair too.

Harry Potter and the Prisoner of Azkaban is brilliant as it has both a sense of wonder and an underlying layer of threat. It’s funny, the characters are becoming more well-rounded and the performances are getting better and better. It’s such a great film, and while there are changes from the book, it’s a great adaptation as it keeps the heart of it. 5/5.