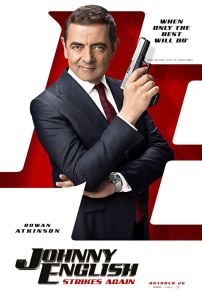 When all the identities of MI7 Agents are revealed in a cyber-attack, the government is forced to recall retied agent Johnny English (Rowan Atkinson), who is the only agent left that might be able to find the hacker.

This is the third Johnny English film and to be honest I have a bit of a soft spot for the series, mainly because of the memories I have of who I was with when I saw each film.

The plot is simple, future events are signposted incredibly obviously, and the villain is so obvious it’s almost painful, but a convoluted plot is not what you get with these movies. There is fun to be had though – a virtual-reality-induced escapade across London is innovative and funny.

It’s Rowan Atkinson’s physical humour that is the best thing about this film and the character, it’s just a shame there wasn’t more of it. there’s a scene where English has taken some adrenalin drugs and Atkinson’s body movements, alongside the different songs playing was brilliant. English’s incompetence that verges on accidentally brilliance is charming albeit predictable, but Atkinson makes it fun.

Johnny English Strikes Again is family fun for all ages. The showing at the cinema I was at had grandparents with young grandkids, and people of all ages between. It’s nice to watch a film that’s silly and fun without violence and sex-references (thankfully the mysterious Ophelia played by Olga Kurylenko is not set up as a love interest at all) and it’s an easy-watch with its less than 90 minutes runtime. 3/5.