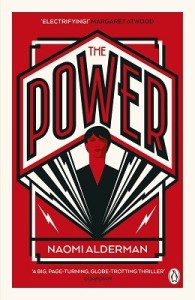 One day, teenage girls all over the world find that with a flick of their fingers they can inflict agonizing pain and even death. As this phenomenon spreads and women of all ages learn to release powerful electricity from their bodies, the world changes forever.

The Power is an engaging read that captures your attention from the outset. It’s a story that’s building up to something so from the very beginning you’re wondering what exactly is everything leading to and what’s going to happen next. The story is largely told from four characters point of view. Roxy, the teenage daughter of a gangster, Margot, an American politician, Allie, a girl who reinvents herself as a religious figure called Mother Eve, and Tunde, a journalist and is the only male character you follow in this story. The story is told in snapshots, you get a dozen pages or so with each character and then it jumps forward a year or so and you see what’s happening in their lives now and how much, or little, things have changed.

The Power is fascinating because one would hope that if women suddenly had a power that men did not, it would finally tip the scale so that both men and women could be equal. They’d each have different strengths and weaknesses but this electrifying power women had would make them be able to protect themselves. Instead, The Power shows the scale of equality tipping in the favour of women. It does take time, but women become power-hungry, aggressive and sometimes sadistic in the way they abuse men for their own enjoyment or just because they can.

In some ways it makes sense, if you have some women who have been abused all their lives in some shape or form by men, it’s almost natural that if they suddenly had the power to cause pain they’d use it against those who hurt them. Also people are complicated! We can’t say that Men Are Bad and Women Are Good, and if women ruled the world it’d be a utopia. Women are just as flawed and as capable of violence as men. That being said, if women were so often seen as lesser-than, one would hope if they got this unique power, they would be more empathetic as they know what it’s like to be the one who’s scared to go out at night.

I hope the last couple of paragraphs make sense. The Power does give you a lot to think about, how society can change in such a reasonably short space of time, how people can forget how things were and how things can snowball into something you could never expect.

The scenes where women abuse men with their new powers are uncomfortable to read. It reminded me of when I read The Passion of New Eve by Angela Carter in my Women’s Writing class at university. It’s almost more disturbing to read about women abusing men, than men abusing women and that is probably because there’s so much media showing men hurting women, that it becomes something you’re almost desensitised to. Women being cruel, sexually assaulting men, making them be in almost constant fear, it’s unnatural in many ways, and seeing that side of the society that evolves in The Power is unsettling to say the least.

The Power is an incredible book. It’s fast-paced, exciting and it’s a story that you’re never sure where it’s going to go next. There are some minor plot points that I wasn’t over keen on, and as I said it’s both unfortunate and interesting that it appears that, at least in this book, an equal society isn’t possible. 4/5.