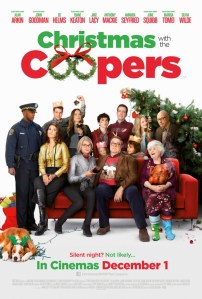 The intertwined stories of four generations of the Cooper family as they come together for their annual gathering on Christmas Eve.

Christmas with the Coopers is one of those perfectly fine Christmas films. As with many films set around the holidays where a large, extended family get together, there’s arguments, secrets and misunderstandings.

There’s a lot of plot threads about the different characters, potentially a few too many but on the whole, it works and that’s due to the cast all giving good performances. My favourite plot was Eleanor (Olivia Wilde) finding a fake boyfriend at the airport so she doesn’t have to go home single. Her relationship with Joe is lovely as she slowly starts to open up to him, and they end up being a couple you root for. The friendship between Ruby (Amanda Seyfried) and Bucky (Alan Arkin) is sweet and does a good job at not veering into being uncomfortable.

I have to mention the ages of the various actors and how as a fictional family, they make no sense. I’m not usually that fussed about actors ages, but in Christmas with the Coopers I did find it difficult to realise who was related to who and how because some people looked too similar our different in age. For instance, Diane Keaton and Marisa Tomei are supposed to be sisters with not much more than a five-year age difference. When Tomei’s character was mentioning a sister, I could not figure out which character out of the rest of the cast she could mean until the very end of the film.

Christmas with the Coopers is sweet, funny and it’s an easy watch kind of Christmas film that’s all about the highs and lows of a big family. 3/5.