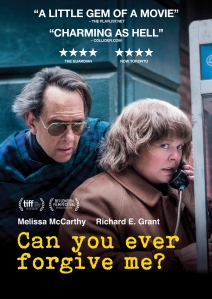 When author Lee Israel (Melissa McCarthy) falls on hard times as her books aren’t selling, she turns to forging letters from famous dead authors, poets and playwrights in order to make a living.

Can You Ever Forgive Me? is a witty and entertaining heist film that has a lot more going on than one might think. While it’s certainly a small-scale heist film, behind the crime Lee is committing, is a story of loneliness. Lee is grouchy and often nasty, and she much prefers to spend time with her cat than with people. Her reclusive and curt nature doesn’t make her popular with her agent (a brilliantly scathing Jane Curtin) nor make her well-known enough to have people want to buy her books.

Melissa McCarthy gives a great performance in a more serious role. Her sensitive take on Lee’s hostilities makes her more than an unlikeable cat lady, instead being someone who has layers and is afraid of getting hurt. Richard E. Grant almost steals the show though as street smart charmer Jack Hock. He helps Lee fence her forgeries and his friendship comes along when she needs it the most. Their chemistry is wonderful as both Jack and Lee were gay, they appear to have a unique understanding of one another. In many ways they are complete opposites but for the most part they work together, their interactions are certainly very funny.

Can You Ever Forgive Me? is a darkly witty little crime film. The script and direction make you like an unlikable character from almost the very beginning and the performances are brilliant. 4/5.