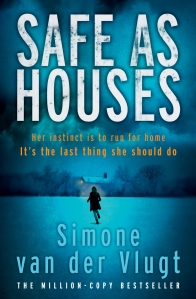 Home is supposed the be a safe place, but when a man forces his way into Lisa’s house taking her and her five-year-old daughter Anouk hostage, there’s no where to hide. In the coming days, Lisa will do just about anything to keep her daughter safe, but all the while she wonders why the only witness to her attack has not raised the alarm.

I listened to the audiobook narrated by Julia Binns and due to both the narration and the story itself, I flew through this book. Safe as Houses is such a compelling story, there’s no slow set-up, instead within the opening chapters Lisa’s home is invaded by a dangerous criminal. It’s fascinating to see how Lisa tries to relate to Kruger, the escaped criminal who has a twisted mind, in order to try and keep herself and her daughter safe. Numours times Lisa ponders how she would react if she didn’t have Anouk with her and this book truly shows the strength of a mother’s determination.

Kruger is a violent man and he sexually assaults and rapes Lisa, believing she’s interested in him and wants it. She shuts down and can’t say no as she’s terrified of what he might do if she puts up a fight. Those scenes are tough to read (or in my case listen to) and they really made my skin crawl.

The emotions of the different characters are fully realised, and they all act in believable ways. Even five-year-old Anouk is neither too mature for her age nor an inconvenience to the plot. She’s a child that on some level knows that things aren’t good as her mother is hit in front of her and they are forced to sleep in the basement, but she also still wants to do finger paints and play with her dolls. When there’s the more everyday moments between Lisa, Kruger and Anouk, having breakfast together, or watching the TV together, it makes everything feel even more unsettling and on a knifes edge.

Safe as Houses is an incredibly fast-paced story so it’s unfortunate that while the conclusion is thrilling, it also comes to an abrupt stop. It’s the sort of ending where I wish there was an epilogue so you could see how the characters are coping because they went through such horrendous things in order to survive. I just wanted a little more from the conclusion after enjoying the rest of the novel.

Safe as Houses is a gripping thriller that’s often tense and scary. It’s a proper page-turner though not necessarily a thriller that will stick in my mind for a long time. Still, it was a strangely enjoyable read. 4/5.