This TBR post is basically going to be one big month-long TBR but a subset of these books will be relevant to my Indieathon TBR. March is Women’s History Month and because I became aware of this sooner rather than later, I plan to focus on reading books by women this month. Each year I read a pretty equal split between male and female authors, but I always find it interesting to take a proper look as to what’s on my shelves.

Also in March is the Indieathon, which is a week-long readathon where the aim is to read books from independent publishers. This readathon is hosted by Ninja Book Box and it runs from Friday 8th to Friday 15th March.

In this big TBR post there will be far more books than I could possibly read during a month (though saying that I am going to making some long train journeys for work this month so that’ll give me more reading time than normal) and I’ll note which books are from independent publishers so those are the ones I might read during the Indieathon. 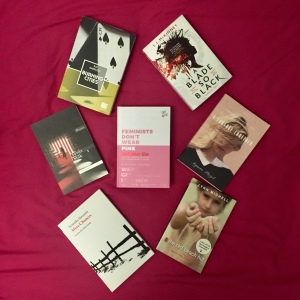 The first four indie books on my TBR this month are all for my Read the World Project. I have, at my last count, 149 countries left to read so it’d be nice if this month could give me a push with my international reading.

Set in the Estonian city of Tartu, Burning Cities follows two generations of the Unger family from the Second World War to the twenty-first century. Mere Chances is a collection of short stories that are said to be strange and about characters who are struggling to maintain their identities. Soviet Milk is about the affects of Soviet rule on one person, how a woman strives to become a doctor but outside forces stop her and even deprive her of her relationship with her daughter. A Fortune Foretold is a coming of age story about a young girl in 1950s Sweden who uses fortune-telling and prophesies to make sense of the world around her. The last indie book on my TBR is one I received from Ninja Book Box’s Summer Reading box last year; The Red Beach Hut is about the friendship between an eight-year-old boy and a man who takes refuge in a red beach hut.

I’m not sure which indie books are the ones I’ll read during the Indieathon specifically, as I’ve said before I’m very much a mood reader, but these books are both from independent publishers and by women, so I hope to read them this month.

All the books mentioned so far feel like they are serious reads so I’ve also picked up Feminists Don’t Wear Pink and other lies it’s a collection of essays and writings from lots of different women from different walks of life, so it’s something I can deep in and out of easily. The last book on my ridiculously ambitious TBR is A Blade So Black. I thought it’d be a good idea to throw some YA in here and this is an urban fantasy story inspired by Alice in Wonderland and with a black protagonist.

These are all the books I’d like to read this month. Are you focussing on reading books by female authors this month? Or are you taking part in the Indieathon? There’s going to be Twitter chats and Instagram challenges so I hope they help me to keep on track. Whish me luck! If I read five of these books that’ll be good for me.