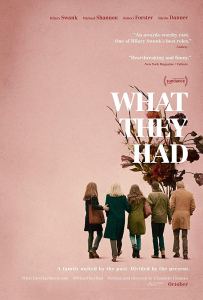 Bridget (Hilary Swank) returns home to help her brother Nick (Michael Shannon) look after their mother Ruth (Blythe Danner) who has Alzheimer’s and persuade their father Burt (Robert Forster) it is time for him to look into care options for Ruth as her illness deteriorates.

What They Had opens with Ruth getting out of bed in the middle of the night, putting on some lipstick, her shoes and a coat over her nightshirt, and then lets herself out of her home and walks off in the middle of a snowstorm. This incident is the final straw for Nick who has been trying to get his father to see how much the illness is affecting Ruth and how they both need help and support. He calls Bridget and she and her daughter Emma (Taissa Farmiga) fly out to help.

Everything about What They Had and how a family deals with a loved one having Alzheimer’s is incredibly true to life. Everyone’s experiences with an illness differs but there were so many moments in this film I could relate to as someone who has had one grandparent die after having dementia, and another currently living with Alzheimer’s. The script allowed each character to have their own point of view of what this illness was doing to their family. Nick is often frustrated as he’s the one that’s been helping his father look after his mother for so long, whereas Bridget can still see the funny side of things – because sometimes things happen or are said which are funny – but that’s not exactly helpful to Nick. Then there’s Bert who is in denial and doesn’t want to be apart from his wife, which is totally understandable, even if that could be what’s best for the both of them.

The whole cast give brilliant performances, with Swank and Shannon bouncing off one another really well and feel like proper siblings. It’s Blythe Danner though that really needs to be commended. The way she portrays someone with Alzheimer’s is spot on and even with the more absurd moments, she’s never over acts it. It’s the quieter moments though, when Ruth slips from being unaware of what’s happening around her, to momentarily understanding it and being frustrated by it, before slipping back to obliviousness, that are like a punch to the gut. It gives her loved one’s emotional whiplash and highlights how horrible the disease is.

What They Had is a well written and well-acted film that never lacks empathy for these characters. It’s certainly a tough watch at times, especially for those who have experienced a love one losing their mind to Alzheimer’s or dementia, but it’s a film that highlights the struggles and difficult choices a family in that position must make. 5/5.